When you think of London’s most photogenic destinations, you don’t think “public transport”, right? TikTok thinks differently. Over the past month, videos of the Emirates Air Line at sunset have racked up over five million views. And audiences took note – last week, TfL’s most overlooked form of transport saw its busiest day in over three years.

The app’s trend of recommending #secretLondon hotspots started in lockdown when – cut off from the usual bars, restaurants and holiday destinations – creators were forced to get imaginative with their content. The Emirates Air Line was one of many “secret” recommendations that started to see increased visitors several months down the line. Others included London’s abandoned church St Dunstan-in-the-East, Holland Park’s Kyoto Garden, and the Garden at 120. But this is far from the first time social content has boosted a destination’s popularity…

In theory, there’s nothing special about Paul Smith’s pink wall. It is – quite literally – just a wall in the middle of Melrose Avenue that’s been painted bright pink since the pre-Instagram days of 2005. But when Instagrammers started flocking for pictures in the mid-2010s, it soon became the pink wall. Nowadays #pinkwall is ubiquitous with the store and tourists wait in queues so long they require a security team. Just don’t mistake the wall’s success as a victory for the brand itself: Fashionista found that only 0.17% of geotagged images were posted by users engaging with the Paul Smith account. (Also, the locals aren’t keen – in 2018, the wall was vandalised with the pointed phrase: “Go fuck ur selfie.”)

You can hardly move for cafés with OTT floral walls nowadays, and we have Peggy Porschen to blame. The pastel paradise had Instagrammers like Amelia Liana, Jordan Emily Rose and Jess Hamilton in a chokehold in 2017 thanks to its seasonal displays and delicately decorated cupcakes, and it still draws big crowds today, topping the list of the UK’s most popular Instagram landmarks. 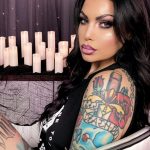 The pioneer of the “selfie museum” – a destination specifically designed for Instagram-friendly photo opportunities. You’ve probably seen pictures of influencers like Bex Campbell and Aspyn and Parker swimming in sprinkles or dancing through the pastel light tunnels. Originally founded in San Francisco, it has since held pop-ups in LA, Singapore and New York, returning to the latter for a second stint after overwhelming demand and taking $5.4 million in the first days of opening.

London lost its own By Chloe cafés earlier this year, but pre-lockdown it was riding high on a wave of online fame. Its interiors are typical social fodder, with neon signs, Scandi-style furniture and branding courtesy of “Instagram restaurant design expert” Laureen Moyal. However, it’s the food that really helped it take off. Its oversized, colourful salads and plant-based meals all look like the end result of the most elaborate TikTok “what I eat in a day” videos.

Every Londoner knows somebody who’s uploaded an Instagram picture of themselves clutching a cocktail beneath the neon declaration “well-behaved women seldom make history”. So many people have flocked to the bar that in 2019 a thread on Reddit went viral pointing out the influx of women on dating apps featuring it in their profile. Considering its interiors are basically a mish-mash of TikTok aesthetics, it makes sense.

This tends to be the story for most places going viral thanks to social content: aesthetic trends are packaged into a paid-for experience, and Instagrammability sustains the hype with minimal effort from the brand itself. Some spots have even adapted to improve their chances of social success. For example, when content creators in Florida began to use Disney World’s existing colourful walls (namely “the bubblegum wall” and “the purple wall”) as backdrops and visitors started flocking to them more than they did rides, the company soon caught on. Additional photogenic walls were constructed, and the company started retailing wall-related merchandise.

But do influencers even want to create content somewhere so exposed? Paul Smith’s pink wall has long been ditched by LA residents for being too cringe. Floral backdrops like those at Peggy Porschen are far less popular today with most established Instagrammer and the Museum of Ice Cream’s feed is now filled with tourists rather than content creators. When Disney started catching on to its own photo hotspots and purposely building more, it was the equivalent of your parents jumping on a trend two years too late.

It’s the same story every time: the appeal is still there for the general public, but not the content creators themselves. The Emirates Air Line is their latest favourite secret spot – until it’s not so secret anymore.